Are you feeling like Day Two posts will never end? I get it. And trust me, after not sleeping on the plane over, I was starting to feeling like day two of the trip was a weird dreamstate outside the time-space continuum. But this day eventually did come to an end (as all things do), and in the most lovely way possible.

But first: a final scramble before our evening game drive. We arrived at Satara Rest Camp in late afternoon and set up our tents for the night. Yes, tents, in a nice but fairly full campground. We were the only ones in backcountry tents. Everyone else had serious gear: generators, standing height-tents, full-on RVs.

I was a little worried when I saw that nearly every site in the campground was occupied. I have spent many a sleepless night in campgrounds all over the world, tossing and turning while other campers play guitar badly, get rowdy or snore to wake the dead.

But a (very quiet) shout-out to the fellow campers at Satara: it was possibly the most peaceful full campground I have ever experienced.

We had planned to rest a little before the game drive but how can anyone lay down in one’s tent when there are animals just outside the campground?!

No, really, I mean really just outside the campground:

We decided to skip napping and instead take a short drive north of the camp, where we were rewarded with our first cape buffalo sighting.

We also saw a bunch more impala and zebra, and of course more elephants, though it was hard to top either the mighty herd or the roadside mom and babies from hours earlier.

After a little more caffeine (we needs it, precioussssss), we hopped into the back of an opensided megajeep sort of truck, with a few other tourists, for a sunset game drive. Not far beyond the Satara gate, our guide spied a rump. A rump! A rhino rump!

He stopped the truck and we watched for several minutes as the rhino grazed and slowly ambled her way down to a river bed to take a drink.

What a beautiful animal. Also, look at the number of tracks all around her. It made me happy to see that, despite the horrors we humans regularly inflict on other species (and our own), there are still places in the world, too few though they may be, that we haven’t completely decimated.

But enough about my worldview, just look at her: 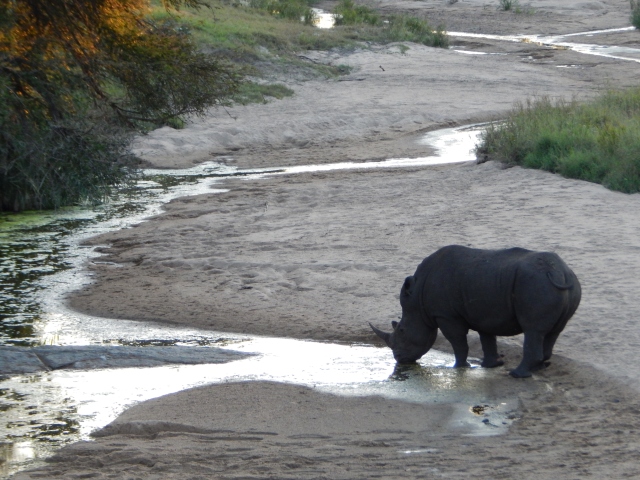 Watching her calmly drink some water and mosey off to graze more made me want to quit my job and work in rhino conservation or at a rhino sanctuary, or just go all avenging ninja and do rude and bloody and very irreversible things to people pumping up the demand for rhino horn. 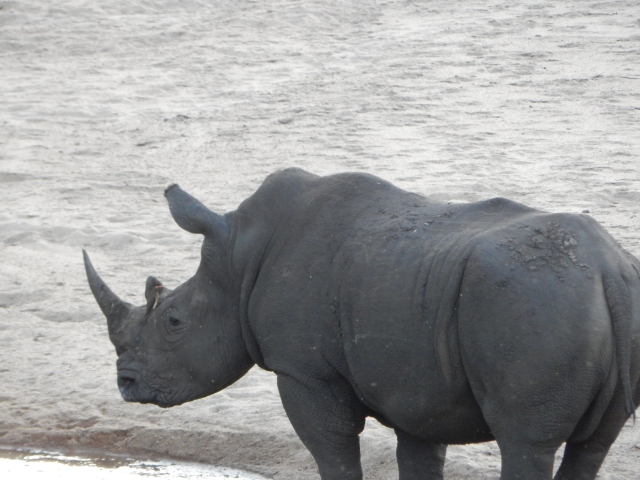 But again, never mind the darker workings of my mind. One more shot of this lovely rhino:

Truth be told I’m not 100 percent sure she’s a girl but either way, what a magnificent beastie. Here’s another impressive animal, a blue wildebeest spotted nearby as the sun slipped ever lower:

I doubted my point-and-shoot would take any photos at all in the growing darkness, but before I put it away for the night — or so I thought! — I did manage to get a couple landscape shots I’m particularly fond of, including this:

And, invariably, some vultures:

Once it got dark, the guide gave people on either side of the truck a couple spotlights to shine out into the bush as we drove slowly on some backroads. We were looking for eyeshine. Anyone who saw it would call out and the guide would stop the truck, back up and shine a brighter light looking for the animal.

I worried a little bit about how disruptive it would be for the animals, coming from deer-in-the-headlights country and all, but it actually didn’t seem to bother the animals we did see, including jackals, more impala (so many impala), zebra and a spotted hyena that I did manage to get an image of:

You might be thinking alright, between this and the blurry vulture, enough with the lousy photos, already but hang on…I got a better shot as she came closer to the road:

She wasn’t interested in us, but rather was returning to her den, literally built against the road, with two pups waiting for her: 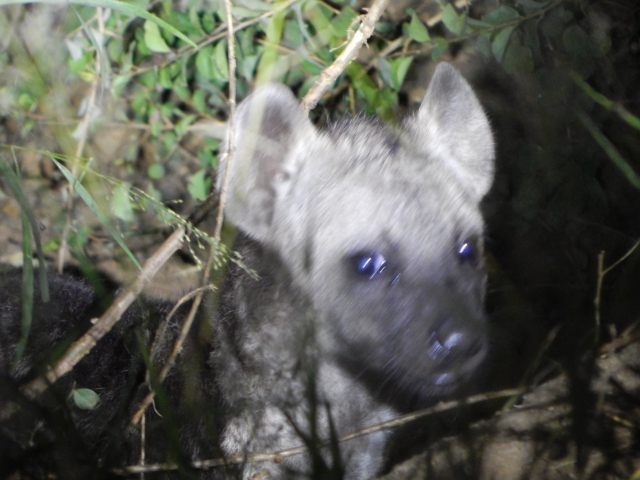 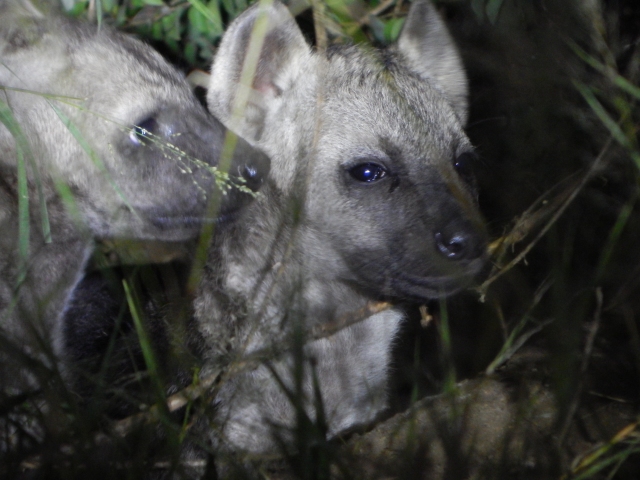 I’m in love. The drive continued for more than an hour, with more wildebeest and impala and zebras and assorted birds, but for me the rhino and these hyena pups were the highlights, and the best way to end a day in which I took about 200 photos and 2,000 wonderful memories.