It was barely mid-morning when we left the mighty herd of elephants and resumed driving north toward Satara Rest Camp. On the way we stopped at one of the few spots in the park, outside of the rest camps, where you are allowed to alight, at your own risk. Though don’t plan on alighting for eternity, fella.

The lookout itself was big and expansive but not jaw-dropping so instead I’ll use my media library space up with a few herbivores, including this kudu. Check out the antlers on this guy!

And how about some more zebras?

Then there’s this guy, one of the more photogenic impala that we saw (and we saw many).

Here’s another shot of supermodel impala:

Another giraffe or two: 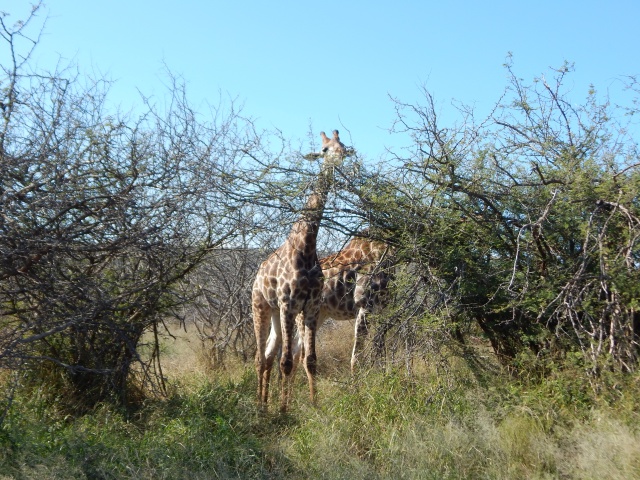 And another monkey (despite the touch of ennui from animal overload that you might detect creeping into my tone, mostly from being undercaffeinated at the time and still coming down from the elephant experience, I really like this photo):

If we were getting a bit inured to the sight of impala and zebra, we sure woke up fast when we picked up a hitchhiker that plunked itself right in the middle of my field of vision.

The crickety thing was only a couple inches long, but…meaty.

After our insectile friend left us, we drove through a dry riverbed at one point (yes, still on the road) and saw some more baboons:

Eventually, still not yet noon, we pulled into Tshokwane, a picnic site with an open-air restaurant where we tried kudu pie and kudu wors, the latter basically a bratwurst made from kudu. Glad I tried them, but both reaffirmed that I don’t enjoy eating meat.

One thing I did enjoy was watching these gorgeous shimmering blue birds, which were all over Tshokwane.

Also all over the picnic site, albeit not so cute, were a number of monkeys that were eating trash. I get it, it makes sense for them to go after the easy pickings and there is only so much a site and its visitors can do to keep their garbage away from the animals, but it was still sad to see. 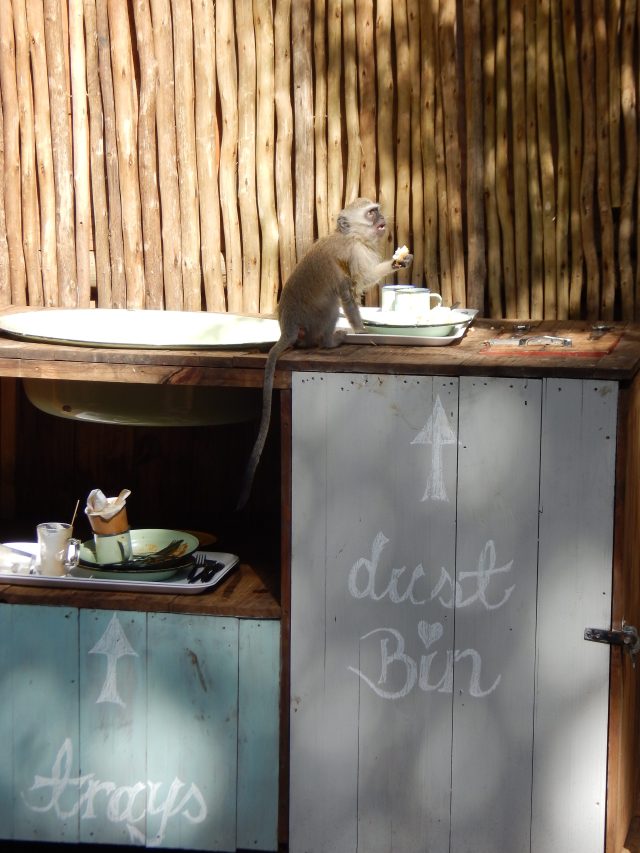 From Tshokwane, freshly caffeinated, we struck back out on the road. More giraffes were waiting:

We then came to a body of water that looked like it was left over from the mass flooding Kruger experienced a few months earlier. We paused to take a photo… 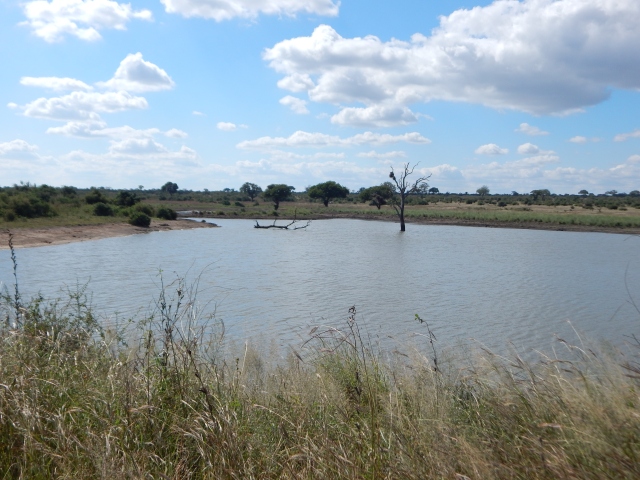 …and realized we were not alone. That lump just to the right of the round bush on the shore is a rather large crocodile… 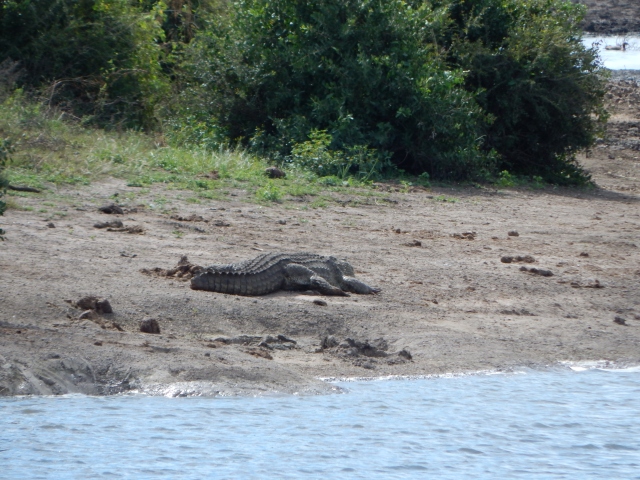 …and that crocodile was not alone. The best advice I ever read about doing a self-drive safari was to just stop the car, turn off the engine and wait. More often than not, an animal will surface: 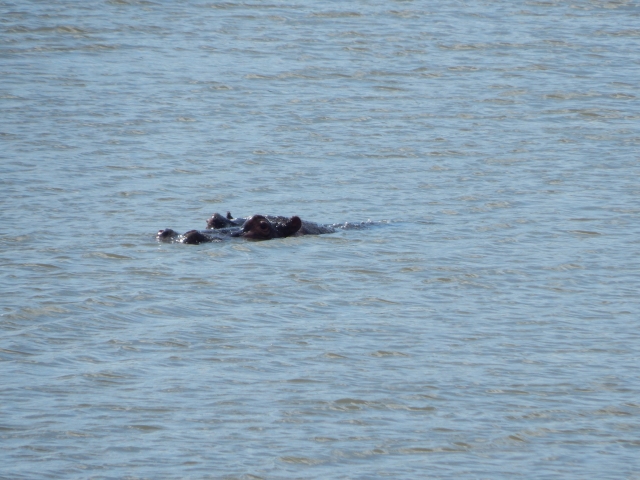 Yes! Croc and Hippo Happy Together. Or at least co-existing.

A little further on, we past a sign for the “southernmost baobab tree” and followed the turnoff. I think this might just be the southernmost baobab in Africa; there may be one beating it in Australia, but regardless, it’s a cool looking tree:

From the baobab it was only about 15 or so miles to Satara, so we didn’t expect to see that much more and were kind of eager to get to the rest camp and set up our tents, maybe even relax a little before the sunset game drive we’d booked in advance.

Then Tori told me to stop the car. Right here. No. Move up. Just a little. Okay, stop. Elephant. ELEPHANT, right by the side of the road. At first she was hidden by thick brush, but then she moved out into the clearing.

You can see how close she is to our car (as well as the campervan that pulled up behind us). As we watched her sniffing about and eating, we realized she had a little one with her.

We were so busy looking at the young elephant that emerged from the bush even closer to the road (right) that we didn’t even see at first that she had a second, even younger one with her (right at mom’s side). 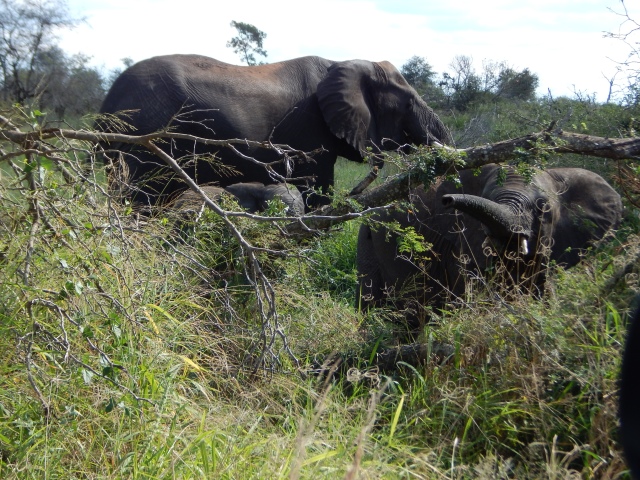 The older sibling was pretty sassy, swinging his trunk at us and kind of making a show of it. 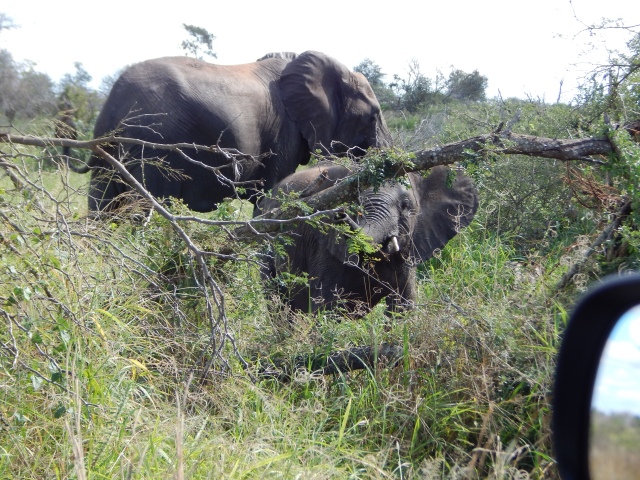 Again, we just sat there, watching them and marveling at how fortunate we were. But I started worrying for the lone mother elephant out and about with not one but two defenseless youngsters. Where was the rest of her herd? Had she not read the informational signage about the risks of alighting in the area? Did she miss that this particular stretch of this particular road, due to its plethora of lions, is considered the “carnivore capital” not just of Kruger but all of southern Africa?

Maybe, we decided, she’s not all gung-ho about being a mom in general and wouldn’t mind halving her maternal responsibilities.

Junior seemed ready to take us on, however. 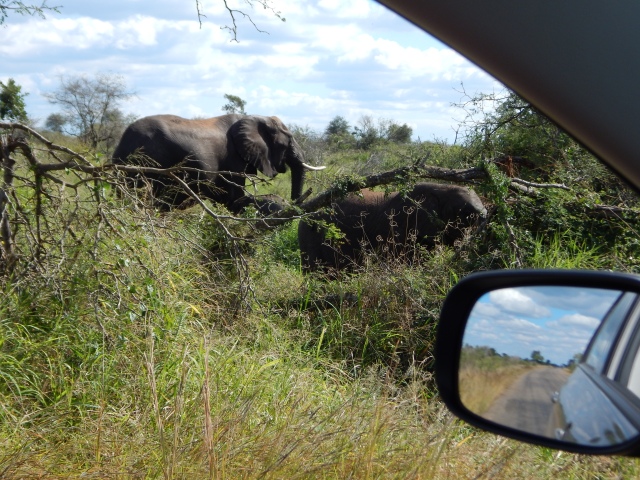 Eventually, all three of them wandered off to their fates. We wished them well, but we too needed to be moving on. But not before we saw our first ostrich of the trip (my photos were particularly meh), follwowed by the first wildebeest close enough for my camera to get a decent image:

Shortly afterward we saw another power trio of giraffes with a very sexy-looking fourth giraffe near them. He was my favorite giraffe of the entire trip. I just love the rich patterning of his fur. I named him Antonio Banderas. In my heart.